Offering you a quick Pro vs Con perspective on the new Canon EOS R camera system.  First, lets review who Canon was targeting with this product release, spec highlights and touch on the RF lens and adapters that were also announced!

Who is Canon targeting to buy the EOS R and RF lenses?:

According to Canon, the EOS R targets the experienced photo and video enthusiasts (rather broad category) and photographers stepping up to their first full frame camera.  If you are a Canon user looking for a hybrid Camera and Video then Canon believes this product can fit your needs with (cropped) 4K and Full HD video recording using Canon EF EFS and the dedicated RF series lenses. Canon believes this camera will find success would be landscape shooting, travel, weddings and events, portraits and available light photography. Priced at $2300 USD this camera lands directly between the Canon 6D II and the 5DMarkIV.

Among the spec highlights, the EOS R has 30 Megapixels, Dual Pixel CMOS AF, 4k video with 10-bit output over HDMI, 5655 AF points, -6EV autofocus, a 3.69 Million dot electronic viewfinder and fully-articulated touchscreen. We’re not breaking new ground here other than this is the first full frame mirrorless system from Canon.  Spec wise it landed exactly where it is priced, right between 6DMark II and the 5DMarkIV.

The new Canon RF lenses are:The RF 28-70mm f2L USM (the first f2 full frame standard lens, but no IS).The RF 24-105mm f4L IS USM.The RF 35mm f1.8 Macro IS USMThe RF 50mm f1.2L USM (the fastest full-frame AF lens in its class again without IS).Having sold over 130 million EF lenses, Canon fully realize compatibility with existing lenses is key to the EOS R’s adoption.  To accomplish this they announced three EF-EOS R adapters: a basic model, one that includes the customizable function ring of RF lenses, and a third which supports drop-in filters with variable ND options and polarizer. HOWEVER with no IS in camera and no IS in some EF lenses you’ll need a steady hand to get best results.

Pros of the Canon EOS R:

In short, this is ground breaking news in that this is the first of what all expect to be many mirrorless product releases for Canon.  Canon is finally in the full frame mirrorless market!

Visit the Photo.net Forum Discussion on Canon EOS R
Support Photo.net and Pre-Order this camera from our friends at Adorama! 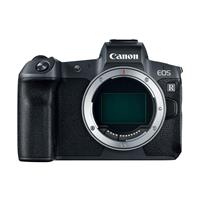